What are they doing?

Thibaut Courant (2010-2013 and 2018-2020) did his master internship and PhD thesis in our group. He came back in 2018 as a postdoctoral fellow working on the development of methodologies in photoredox catalysis, electrosynthesis and organic Lewis acid catalysis.

Clément Audubert (2020) worked in the fields of photoredox catalysis and asymmetric organocatalysis during his postdoctoral studies in our group. He is currently R&D technical manager at PMC Isochem (Ile de France).

Jérémy Mérad (2017-2018) worked in the fields of photoredox catalysis and asymmetric organocatalysis during his postdoctoral studies in our group. He is nowadays assistant professor (University Claude Bernad Lyon 1).

Loïc Pantaine (2017) worked in the team in collaboration with Dr Christophe Bour (UPS, ICMMO) on the combination of gold- and photocatalysis. After a second postdoctoral study in the group of G. Molander, he joined the group of Michael Willis in Oxford in 2019 thanks to a Marie-Curie fellowship.

Veronica Santacroce (2016-2017) worked during his postdoctoral fellowship in the team on photoredox catalysis. She is actually working in the group of Prof. Giovanni Maestri in University of Parma.

Ludovic Marciasini (2015) joined Dr. Masson’s team for a postdoctoral position, working on the total synthesis of Martinellic acid. He works nowadays in a company in Canada (OmegaCem)

Guillaume Dagousset (2009-2011 and 2013-2014) received in 2011 his PhD at ICSN under the supervision of Pr. Jieping Zhu and Dr. Géraldine Masson, working on the Povarov reaction and the phosphoric-acid catalyzed enantioselective synthesis of diamino compounds. In 2013, he joined the group of Dr. Géraldine Masson as a post-doctoral fellow, and he worked on photoredox catalyzed reactions involving enecarbamates. He is currently “Chargé de Recherches” CNRS at the “Institut Lavoisier de Versailles.

Antti Kataja (2013-2014) worked in the team of Dr. Géraldine Masson as a postdoctoral fellow, and carried out research in synthesis and applications of novel chiral hypervalent iodine catalysts. He is working as a research and development chemist at Fermion Oy, a pharmaceutical industry in Finland.

He Long (2011-2013) worked in the team as a postdoctoral fellow. He is actually working as an assistant professor at China West Normal University.

Aurélien Alix (2012) joined the group of Dr. Géraldine Masson as a post-doctoral fellow where he worked on enantioselective and organocatalyzed alpha-bromination of enamides. Since September 2012, he is Maître de Conférences at ICMMO in Orsay.

Claudia Lalli (2010-2012) joined the group of Dr. Géraldine Masson as a post-doctoral fellow, and worked on enantioselective and organocatalyzed alpha-amination and alpha-bromination of enamides. Since October 2012, she is “Chargée de Recherche” CNRS at the ISC in Rennes.

JiYuan Lyu (2018-2021) obtained a CSC fellowship to complete his PhD in our group in collaboration with Pr Pierre Audebert (PPSM laboratory at ENS Paris-Saclay). His work dealt with organic photocatalysis with a special focus on the development of new bifunctional chiral photosensitizers. He is currently a a postdoctoral fellow in the Ming Shang group at Shanghai Research Institute Of Chemical Industry (China).

Tuan Le (2017-2020) completed his master and PhD theses in our group in collaboration with Pr Pierre Auderbert and Dr Clémence Allain (PPSM laboratory at ENS Paris-Saclay). He developed new tetrazine and heptazine dyes and applied them as organic photoredox catalysts in oxidative transformations under visible light. He is currently studying computer sciences at Université Paris-Saclay.

Coralie Gelis (2015-2018) developed new Bronsted acids- or hypervalent iodine-catalyzed cyclisative enantioselective reactions during her doctoral studies in our group. She is working as a postdoctoral researcher in the group of Prof. Frank Glorius (University of Münster).

Lucie Jarrige (2017-2018) developed new synthesis of heterocycles during her doctoral studies in our group. Afterwards, she joined the group of Prof. Eric Meggers as a postdoctoral fellow (University of Marburg, Humboldt fellowship). In 2020, she has been appointed CNRS researcher in the team of Dr Marc Mauduit (ENSCR, UMR 6226).

Audrey Dumoulin (2013-2016) worked during her PhD in the team on the development of phosphoric acid-catalyzed amination reactions of enamide derivatives and the designe of new chiral organoiodanes. She is nowadays working at Oncodesign.

Clément Lebee (2013-2016) joined Dr. Masson’s team for a PhD on the enantioselective photooxygenation and epoxydation of enecarbamate catalysed by Brønsted acids. He is orking at ANSES.

Mathieu Bekkaye (2012-2014) joined the group of Dr. Géraldine Masson to conduct his postgraduate studies on asymmetric alpha-substitution of imines using oxidative and organocatalytic processes. Nowadays, he works at Chromatotec.

Grégory Laurent (2012-2014) conducted his PhD in Dr. Géraldine Masson’s group on organocatalysed 1,3-dipolar cycloadditions and new organocatalysts synthesis. He is working in an IT company.

Thibaut Courant (2010-2013) worked during his PhD in the team on imines functionnalizations by photoredox processes involving Iridium complexes or by direct organocatalysed Friedel-Crafts reaction. After different postdoctoral studies in the groups of Waser, Micouin and Lecourt, he is currently in our group as a postdoctoral fellow.

Danijel Glavac (2018) joined the group thanks to an exchange between France and Croatia. He worked on the development of new catalytic enantioselective cycloadditions.

Matteo Lanzzi (2016) joined the group thanks to an exchange between France and Italy. He worked on photocatalytic activation of C-S bounds.

Lucas Bento dos Santos (2021, Paris Creteil University) worked on the synthesis of a a natural product involving a phosphoric acid-catalyzed asymmetric transformation as a key step. He is currently continuing his studies in a work-linked training.

Damien Bouchet (2020, Sorbonne-Université Paris) worked on the developement of new asymmetric transformations with chiral phosphoric acids. He is in the group for his Ph.D studies.

Didine Biatuma (2020, Univerité Paris-Saclay) worked on the total synthesis of a natural product featuring an enantiosective organocatalytic transformation as a key step. She is teaching.

Aurélie Djian (2019, ENSCM) developed a new electrochemical access to CF3-containing azacycles. She is now a PhD student in the group of Prof. Joanne Xie (ENS Paris-Saclay).

Miléna Rives (2019, University of Bordeaux) was interested in the development of new photocatalytic methods and new enantioselective organocatalytic transformations. She is now research associate at Evotec (Toulouse).

Dina Boyarskaya (2018) was involved in the developement of new photocatalytic methods. She joined Prof Jieping Zhu in EPF Lausanne (Suisse) for her PhD studies.

Goual Nawel (2018) was invovlved in the development on new photocatalytic tandem reactions. She is doing her PhD studies under the direction of Dr Arnaud Voituriez (ICSN).

Thomas Varlet (2018) worked on the synthesis of S-heterocycles via organocatalytic intramolecular hydrothiolation of non-activated alkenes during his internship. He is continuing his PhD studies in our group.

Tuan Le (2017) worked on the developement of new organic photocatalysts during his internship. He is continuing his PhD studies under the direction of Prof Pierre Audebert (ENS Cachan).

Siwar Zaied (2017) worked on the synthesis of bioactive heterocycles.

Morgan Languet (2014) joined the group for an internship dealing with photocatalysis. After his PhD studies under the direction of Prof Janine Cossy (ESPCI), he is nowadays working in at DRT Les Dérivés Résiniques et Terpéniques.

Ghislaine Boudali (2013) worked on the enantioselective synthesis of ndolo-pyrrolidines via a tandem Friedel-Craft/cycloaddition reaction. She is nowadays working at GlaxoSmithKline.

Mathieu Bekkaye (2012). He continued his PhD studies in the group of Dr Géraldine Masson. 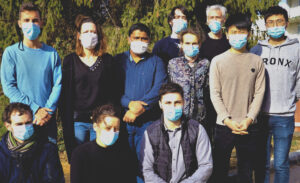