The research of the Functional Chemistry – Chemical Ecology team is based on several axes: 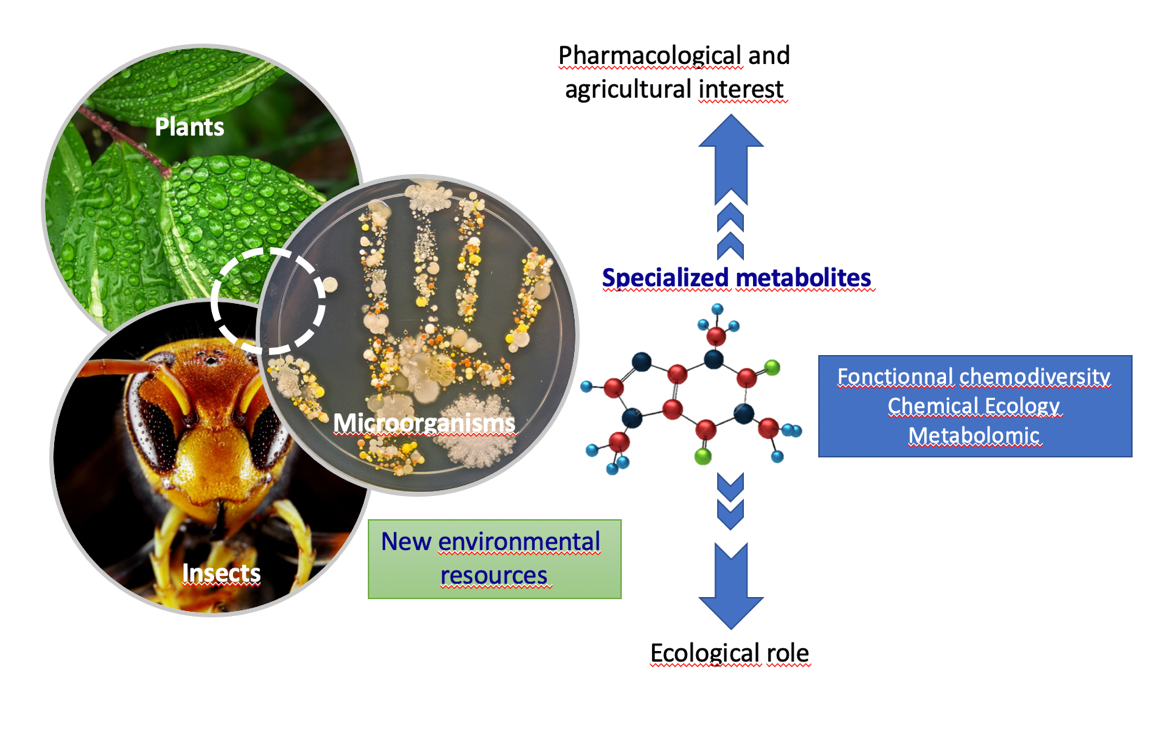 Endophytes, an original resource for the search for compounds of interest

New acorane sesquiterpenes isolated from the endophytic fungus Colletotrichum gloeosporioides SNB-GSS07. Looking for new anti-glycation compounds, four new acorane sesquiterpenes together with seven known molecules were isolated from Colletrotrichum gloeosporioides, an endophytic fungus of Sabicea cinerea. Their structures were established based on mass spectrometry and NMR, together with circular dichroism for their absolute configurations.

Two new isopimarane diterpenoids from the endophytic fungus Xylaria sp. SNB-GTC2501. Two new isopimarane diterpenoids, xylabisboein A (1) and B (2), as well as three known secondary metabolites (i.e., (−)-5-methylmellein (3), mellein-5-carboxylic acid (4) and ergosterol peroxide (5)), were isolated from a solid culture of the endophytic fungus Xylaria sp. SNB-GTC2501. The structures were elucidated by spectroscopic analysis and the absolute configuration of xylabisboein A (1) was determined by X-ray crystallographic analysis. All of the compounds were tested for their antimicrobial and cytotoxic activities. 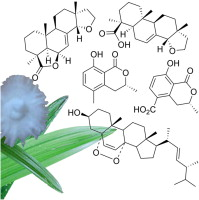 Secondary Metabolites Isolated from the Amazonian Endophytic Fungus Diaporthe sp. SNB-GSS10. We describe a Sabicea cinerea endophytic fungus closely related to Diaporthe pseudomangiferae that produces two known metabolites, mycoepoxydiene (1) and altiloxin A (2), as well as enamidin (3) and eremofortin F (4), two compounds not previously described in the literature. The structure of these four metabolites was elucidated using spectroscopic analysis, and their cytotoxic activities were measured against the human cell lines KB, MRC-5, and MDA-MB-435. 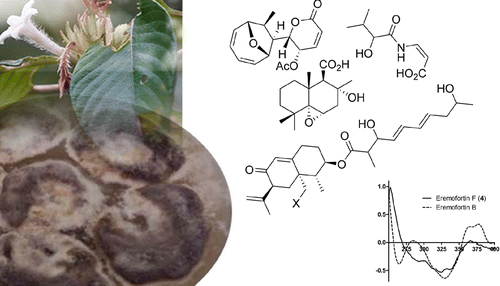 Antimicrobial and cytotoxic secondary metabolites from tropical leaf endophytes : Isolation of antibacterial agent pyrrocidine C from Lewia infectoria SNB-GTC2402. Because of the symbiotic nature of endophytes, this survey aims to investigate the probability of discovering antibacterial, antifungal and cytotoxic activities in leaf endophytic microbes. We isolated 138 cultivable microbes (121 fungi, 3 bacteria and 14 unidentified or unknown microbes) from 24 plant species, a significant relative proportion of which exhibited antifungal and cytotoxic potential against Candida albicans ATCC 10213 and the human cell lines KB (uterine cervical carcinoma), MDA-MB-435 (melanoma), and MRC5 (normal human lung fibroblasts). Three active fungal extracts were fractionated, resulting in the isolation of eight compounds. Seven had been described in the literature including the following : acremonisol A, semicochliodinol A, cochliodinol, griseofulvin, pyrenocin A, novae zelandin A and alterperylenol. A previously unreported compound named pyrrocidine C was isolated from Lewia infectoria SNB-GTC2402 and identified by spectroscopic analysis. As in pyrrocidines A and B, this compound is a cis-substituted decahydrofluorene with a quaternary carbon at C-5 and opposite stereochemistry at C-8 corresponding to C-6 of pyrrocidines A and B. 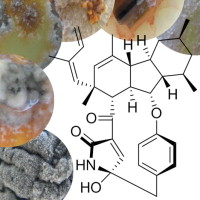 Tyroscherin and tyroscherin analogs from Pseudallescheria boydii SNB-CN85 isolated from termite Termes cf. hispaniolae. Two new tyroscherin derivatives: N-methyl-tyroscherone (2) and tyroscherin N,O-acetonide (3), as well as two known secondary metabolites tyroscherin (1) and pseurotin A (4), were isolated from a solid culture of the termite-borne fungus Pseudallescheria boydii SNB-CN85. The structures were elucidated by spectroscopic analysis and chemical modification. Compound 3 was synthesized from tyroscherin (1) in the free amine form by heating in deuterated acetone, followed by deuterium-proton exchange in MeOH. All compounds were tested for their antimicrobial activities on C. albicans and S. aureus, and 2 and 3 exhibited minimal inhibitory concentrations between 128 and 8 μg mL−1.

Mucorolactone, a Macrolactone from Mucor sp. SNB-VECD13A, a Fungus Isolated from the Cuticle of a Vespidae Species. The newly discovered macrolactone, mucorolactone, along with eight known compounds, was isolated from an ethyl acetate extract of the insect-borne fungus Mucor sp. All structures were elucidated using 1D and 2D NMR and MS spectroscopic experiments. Relative and absolute configurations of the original skeleton of mucorolactone was deduced from NOESY experiments, from the 13C NMR chemical shift calculation based on the DP4 probability method, and from the comparison of experimental and calculated electronic circular dichroism spectra.

Aedes aegypti Larvicidal Sesquiterpene Alkaloids from Maytenus oblongata. Four new sesquiterpene alkaloids (1–4) with a β-dihydroagrofuran skeleton and a new triterpenoid (5) were isolated from an ethyl acetate extract of Maytenus oblongata stems. Their structures were elucidated using 1D and 2D NMR spectroscopy as well as MS and ECD experiments. The M. oblongata stem EtOAc extract and the pure compounds isolated were tested for larvicidal activity against Aedes aegypti under laboratory conditions, and compounds 2 and 3 were found to be active.